What can’t a vegan eat? 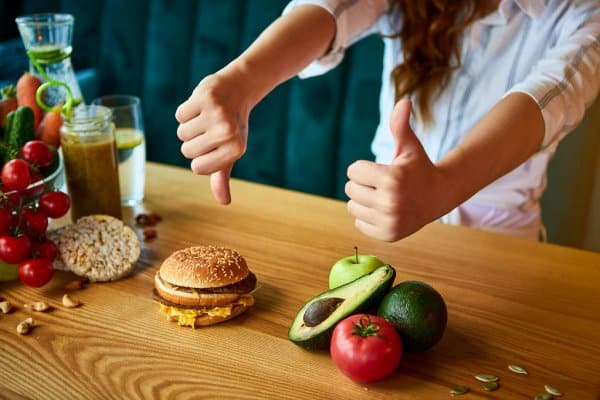 Actually, being vegan is not just about eating vegan or non-vegan food.

It is an ethical commitment made by those who do not consume any kind of product with animal origin. To know how to become vegan you should be aware that there is much more to it than just going along with a vegan diet.

Certainly, being vegetarian is already a good start, but being vegan is going much further. It is a philosophy of life that implies a radical change in consumption and diet. For the animals, for the planet, and for your health.

What foods can't a vegan eat?

And what can't you really eat? The basics we already know: meat and fish, eggs and milk are not found in any vegan restaurant.

In the case of milk and eggs, we must consider some important points to understand why they are included in this list, since neither directly involve the killing of animals for their consumption.

However, the processes that lead to the commercialization of milk and eggs are highly condemnable, as they include practices that can be classified as promoting animal suffering and cruelty.

For example, cows are artificially inseminated so that they can produce milk, which causes health problems that reduce their life to only 8 years, when they can normally live up to 20 years. In the case of chickens, the main issue is the poor living conditions of the animals in intensive farming.

However, in addition to these basic foods, we should pay even more attention to what is not so obvious. Ideally, one should avoid eating processed foods whose manufacture often includes animal products.

Take the famous example of eggplant: If you go to the market to buy an eggplant, you can be sure that it contains only eggplant. But for a packaged product in a supermarket, you have to look more carefully. The more we use whole, natural foods, the less chance we have of accidentally consuming animal products.

The key is to be analytical and attentive when choosing your products. For example, did you know that frozen French fries can have lard and milk and rice can have animal fat and protein? The question to ask is, then, which products should we be careful with?

White sugar, on the other hand, is filtered through burned animal bones. For the production of beer and wine, ingredients such as milk and egg protein, gelatine, bones, egg protein, chitin, dried blood, and a natural collagen from fish bladder are used.

Because of the lower costs involved in this process, companies often source vitamins from the easiest source: the animal. This is the case for vitamin A, B-complex vitamins, and vitamin D.

In the case of bakery cakes and industrial sweets, animal fats (especially milk and eggs) can be found. Additives, used to preserve or improve the appearance of food, are also problematic. This is because there are additives of animal and plant origin, the most commonly used being E441, which comes from the alkali or acid treatment of animal hides, tissue, or bones.

Also E120, known as carminic acid, is of animal origin, more specifically from Dactylopius coccus. Gelatin comes from animal collagen and anchovies are used in the English sauce. None of these ingredients are used in our vegan restaurant in Lisbon.

Besides not having a diet that comes from animal food, vegans don't use leather, wool or thirst, nor - of course - products tested on animals, as is often the case with beauty products.

And there are still activities that are completely forbidden. That anyone who wants to know how to be vegan should cross out:

The list seems long, which is not to say that it is restrictive. Yes, Nature offers plenty of foods that can be part of a vegan diet. Want to know how to become vegan? Take a look at the products you can eat.

Foods that are part of a Vegan Diet

Having these names present and knowing the endless possibilities of the vegan diet doesn't mean you shouldn't be careful transitioning your diet and lifestyle. To do so according to the science and knowledge available in the area, consult a nutritionist.